Home Boat Builders We can finally admire Lonian in all her glory. A fabulous Feadship...

Created for owners with thirteen years of superyacht experience, this pure custom yacht could not have any kind of publicity so far since it was an owners’ request to remain confidential to enjoy the maximum privacy even when cruising. Now that the owners gave the green light to share some highlights from this splendid photo-shoot, we are able to admire this 87-metre yacht named Lonian, in her natural habitat, anchored in a bay, while enjoying the maximum of the privacy.

This article was published on Superyacht Digest JANUARY ISSUE 2020 – Pag. 62

Launched in July 2018, with no official publication of information to date, despite all the visibility it has had on Feadship’s YouTube channel where five million people around the globe have watched the video of her construction, Lonian can now finally be admired in all her glory, with a superb design and refined construction.

The images chosen really capture just how well the original briefing, which was based on a philosophy of spending as much time as possible at anchor rather than moored in marinas, has been met. Once the perfect spot is found for a period of peace and serenity mixed with fun and games, Lonian’s anchors are dropped and the various platforms, hatches and doors are opened to allow optimum access to the surrounding waters. 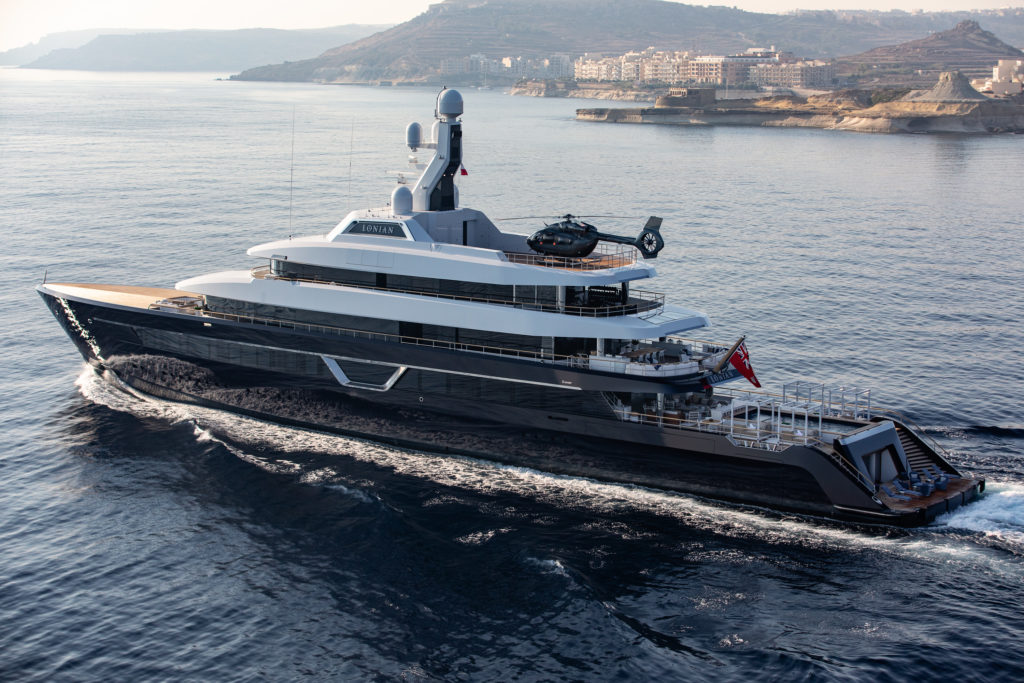 While Lonian has ample space within her 87 metres to effortlessly carry a flotilla of tenders and toys, she also travels with a 66-metre support vessel to transport even more equipment along with up to twenty crew, further optimising the family’s all-out enjoyment of secluded locations. In addition to facilitating the freedom and flexibility to fully experience the environment in which Lonian anchors, the yacht has 22 different openings that generate an unrivalled open feel onboard while also setting a new benchmark for a specific type of engineering and construction.

The owners chose Sinot Exclusive Yacht Design for Lonian’s exterior styling because they are a great fan of the Dutch studio’s masculine style. The result is a Feadship with the presence and stance of a beefy motoryacht which simultaneously retains an elegant and slender air. Lonian’s Majestic Blue hull represented a considerable challenge even for Feadship’s legendary paint team, which was tasked with achieving this regal look in the kind of dark hue that is very unforgiving of any faults. 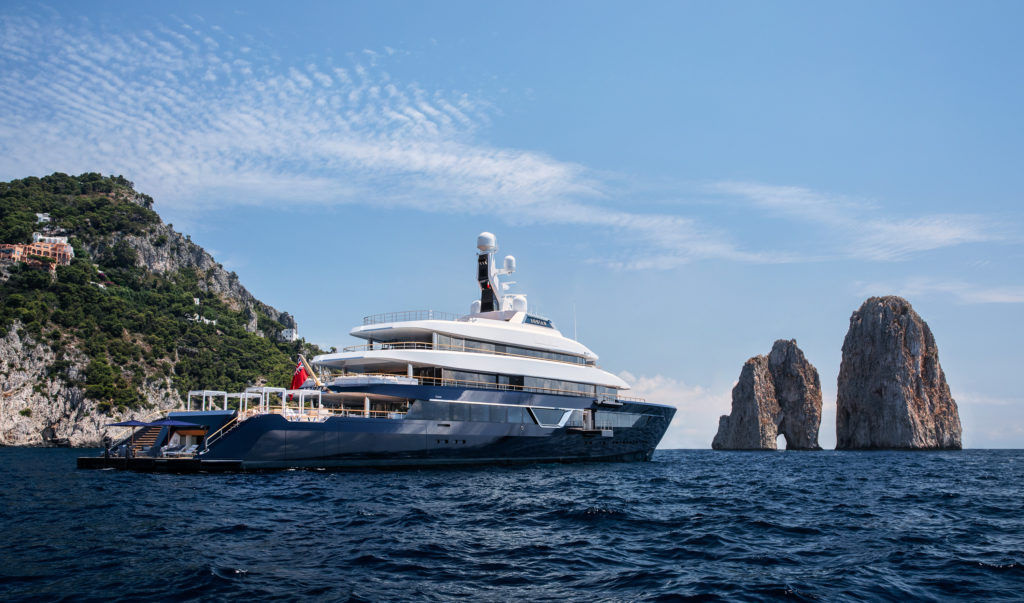 Another highly visible aspect of Lonian is liberal use of stainless steel: from the signature V-cut feature on port and starboard side to the dramatic bow, this adds to the glamour of the design as well as its coherence. The same goes for the wealth of glass used in the wide body section of a design that is actually surprisingly slimline considering the full-beam main deck with no sidewalks. Such a layout has major implications for crew logistics, of course, superbly solved here by making optimal use of the ample space available on the lower deck to enhance service traffic. The muscular look of the bow is another example of form meeting function, with the extra volume adding to the yacht’s interior real estate. 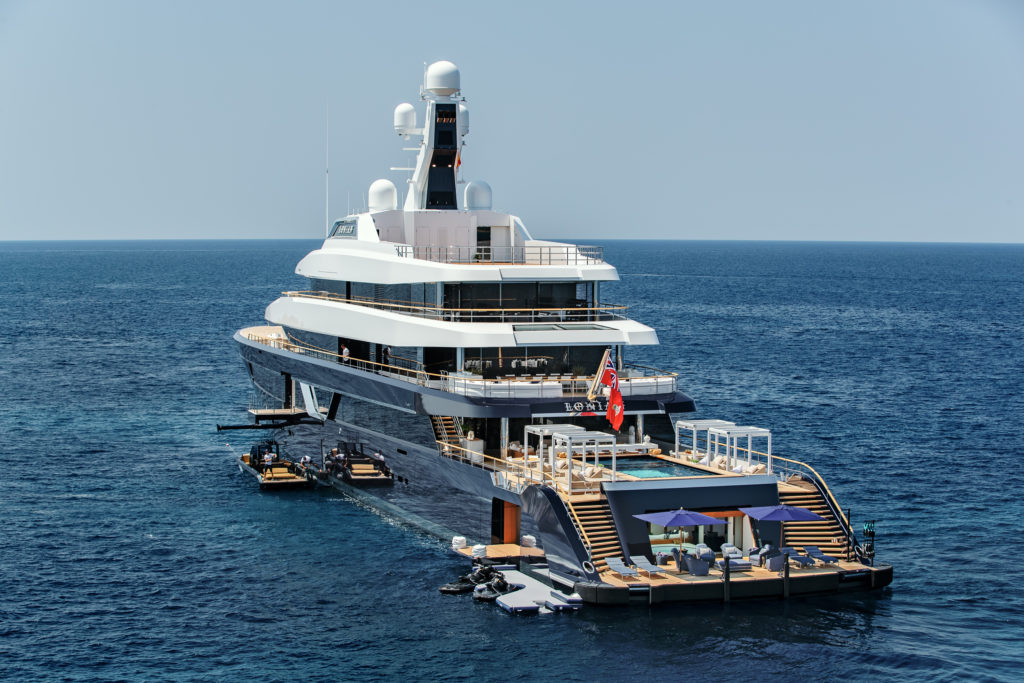 This theme of synchronising practical requests with smart aesthetics is continued with the various protrusions incorporated into the construction. For instance, the three platforms surrounding the beach club aft, port and starboard all had to be located at a certain height above the water to safeguard against flooding. The owners and the creatives from Sinot and Feadship were not prepared to simply follow the obvious solution of increasing the height of the hull, as this could have given Lonian a somewhat stumpy appearance. Instead, they put an immense amount of work into optimising the hull height to ensure it would work perfectly for a yacht of exactly this length. 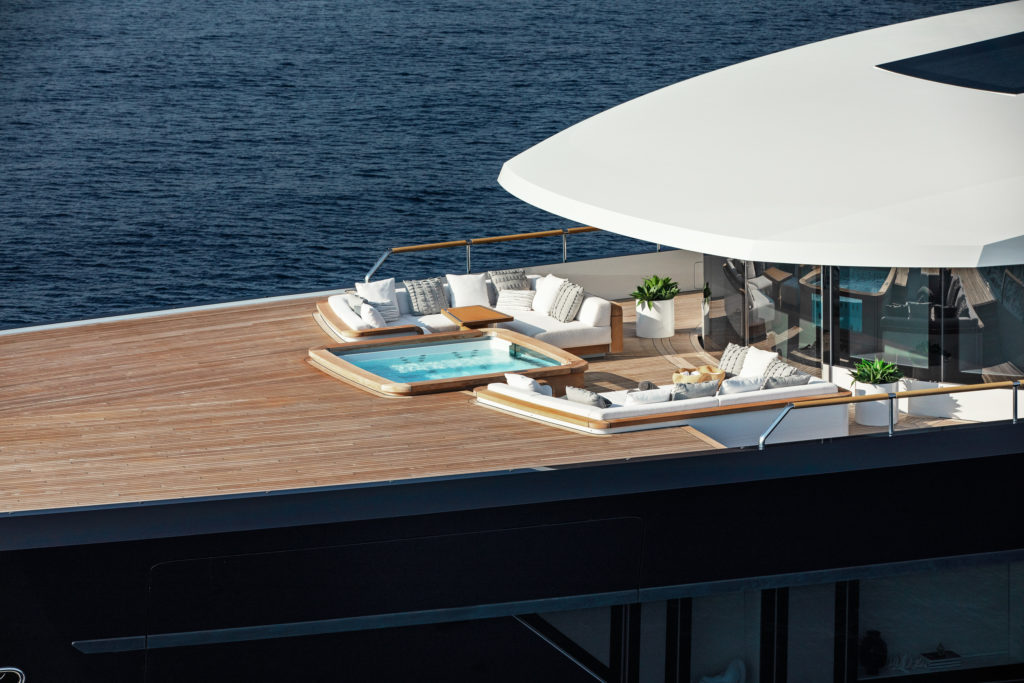 The design teams also had to take into account the added complexity of the owners’ desire for a swimming pool with a translucent bottom that would double as part of the ceiling of the beach club below. As the images show, this is a dramatic feature, and a fascinating way to solve the puzzle of amalgamating a beach club floor, platforms side and aft, a pool bottom made of glass with no construction at the sides, and the pool itself. 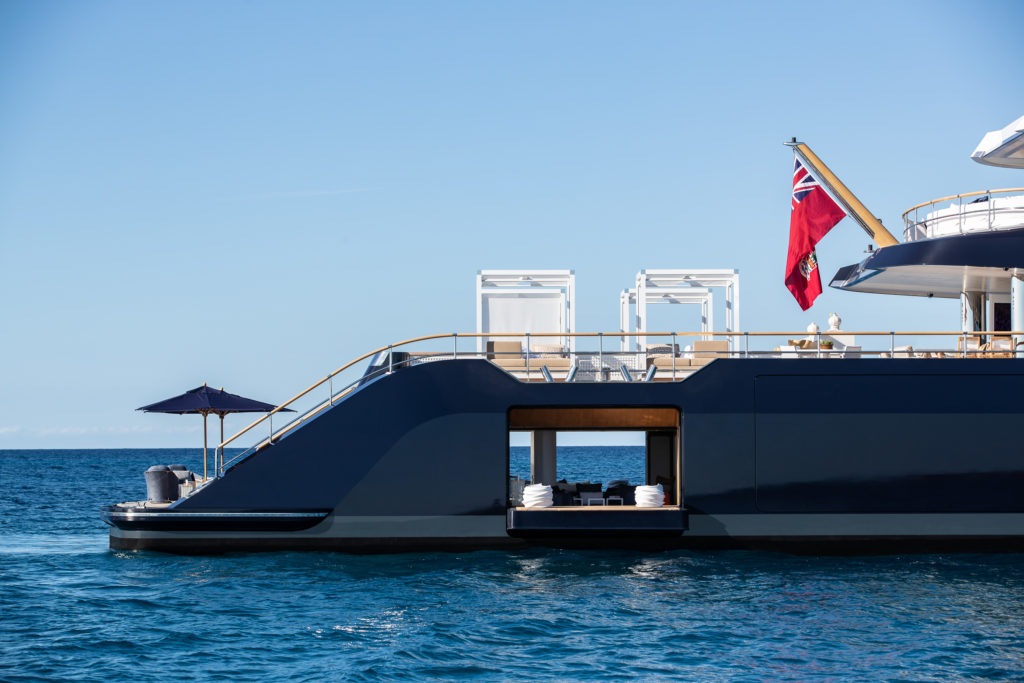 A key component of the solution was to place the surface of the pool 50 cm above deck height, which had the added attraction of creating a great place for guests to sit and paddle their feet after some serious lounging on the adjacent cabanas. 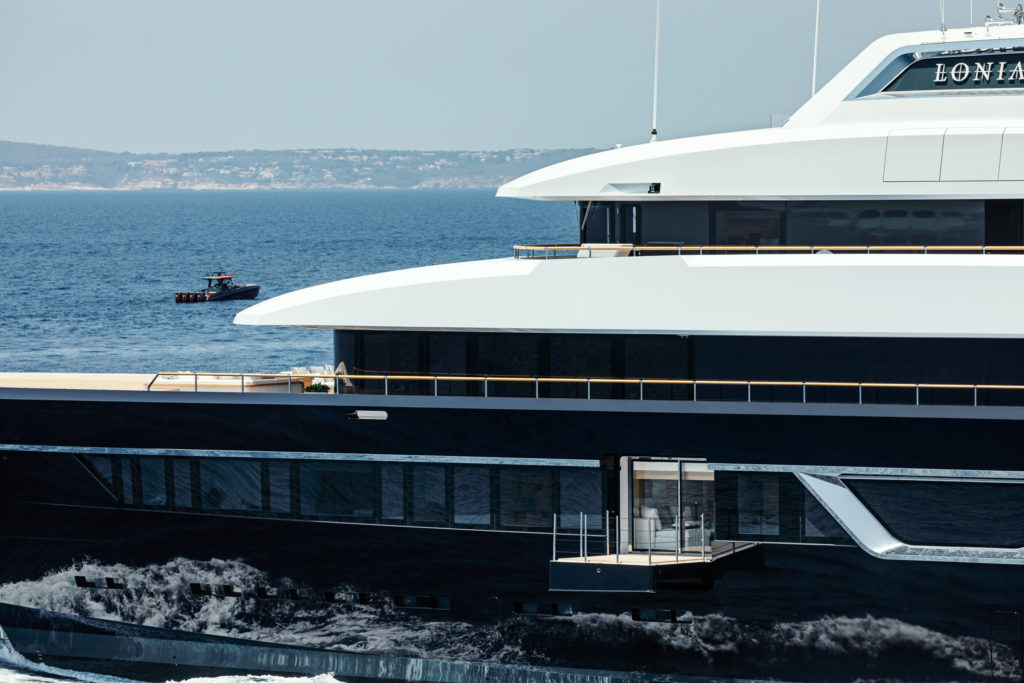 By the way, there is also a cinema screen integrated at the end of the pool but, as that’s not visible in these daytime shots, we will simply say that the entire stern structure was mocked up in life size as well as calculated to the finest degree on computer. And to report that the owners were delighted with this intricate and fundamental part of the whole design. 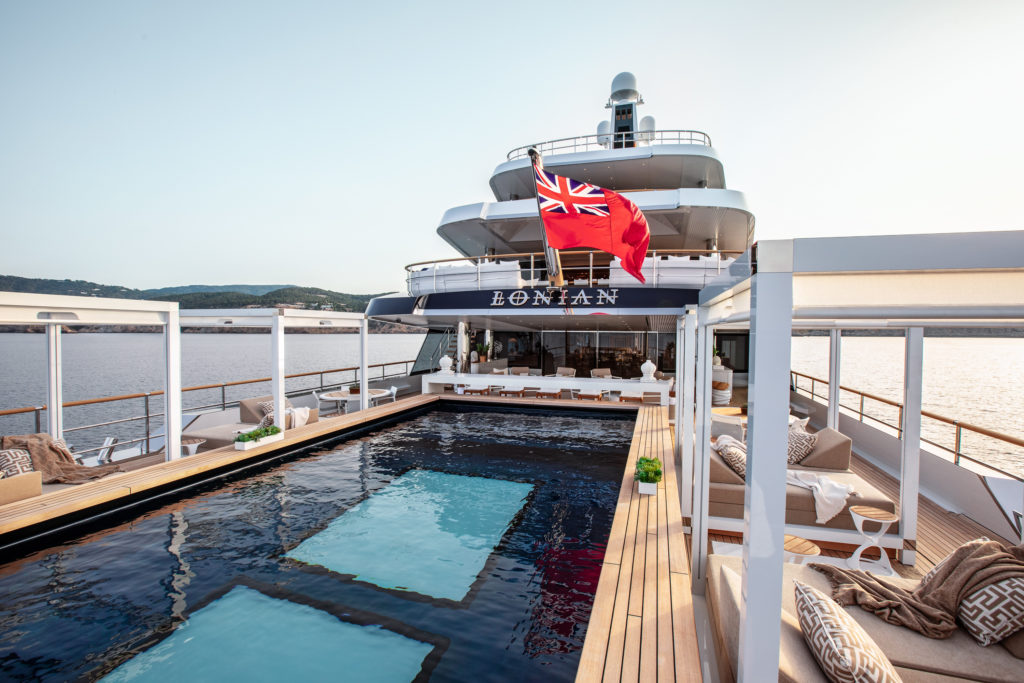 The same goes for another awesome piece of engineering art in the aft section of the boat – the first-time inclusion of a transom hatch with a flush swim platform that opens and closes in the same way as a convertible car. The teak hatch opens first and the aft door descends before the hatch closes again, leaving no visible sign of a threshold or door. It’s another Feadship-first innovation that may well be seen on future yachts. 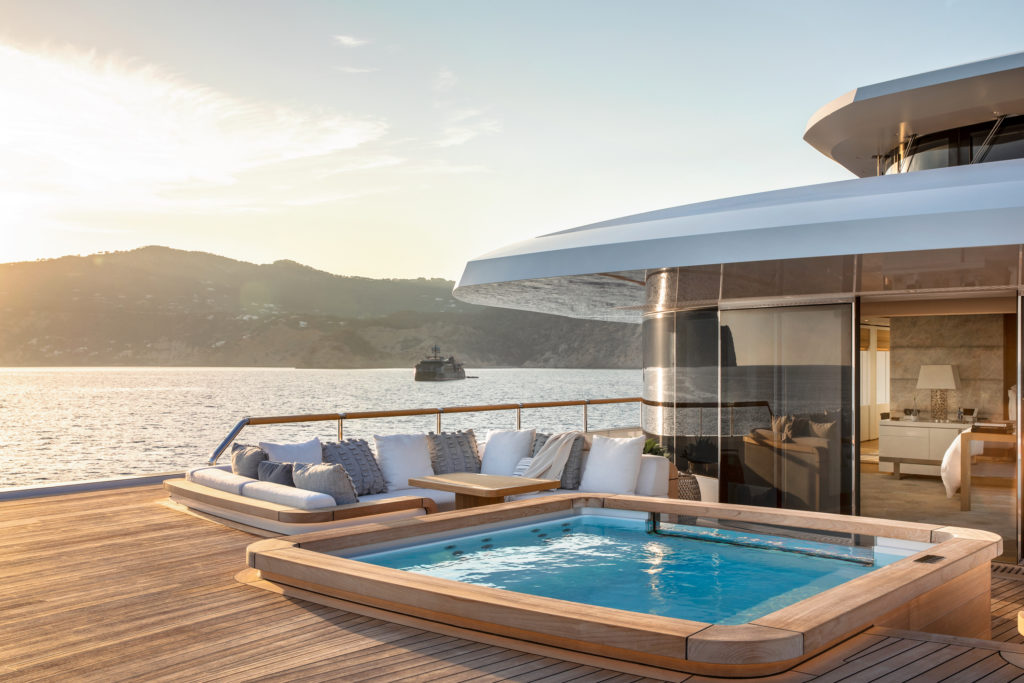 Other hugely successful features to note on the photos include the owner’s deck with the giant skylight and large flush foredeck. The latter features a Jacuzzi with a bespoke cooling and heating functionality which allows for a range of temperatures between 10 and 38 degrees. This is ideal for the owners, who love the sensation of a chilled plunge pool after spending time in the bridge deck gymnasium, itself a remarkable feature as it offers the rare option to exercise not only inside but also al fresco thanks to the connecting doors.

It is not only the owners who enjoy exclusive pleasures on board Lonian, as you can see from the balconies with exterior sliding doors on the two VIP staterooms. Guests arriving by tender can make use of a smart boat boom solution thanks to the absence of gangways. These extended telescopic booms allow tenders to attach to the platform on the starboard side and comfortably access the guest entrance. They may also arrive by air as Lonian has a fully equipped deck for an AW169 helicopter. And if the tender needs a home for the night the substantial crane located on the helideck is capable of lifting 3.5 tonnes.

An exterior feature of note that you cannot actually see is the high-end audio installation with speakers outside as well as in. All the hi-fi gear has been incorporated as an integral part of the construction in a solution that sounds as great as it looks (if you know where). Lonian’s interior, created by Sinot in cooperation with Richard Hallberg Interior Design, will remain a private affair – although we can share that it includes a breathtaking glass elevator serving all five decks and an amazing main deck lounge without any pillars to interrupt the panoramic full beam views (yes, another enormous feat of engineering expertise).

Technical highlights that can be revealed include a low temp/high temp heat exchanger system, a propulsion set-up with both conventional and full hybrid diesel electric options (another Feadship first), rim-drive bow and sternthrusters, the very latest dynamic positioning system to add to the comfort at anchor, and a full range of Nitrox diving equipment. How these all work may, at the owners’ discretion, be a story for another day: for now, let us enjoy these stunning images of a yacht that is the very definition of pure custom contemporary design.