After an exhilarating season of events on the world’s most fascinating seas, the Panerai Classic Yachts Challenge approaches the end of its 10th year. Between September 21st and 28th, in fact, the 11th and final stage of the circuit plays out as part of the 36th edition of the Régates Royales de Cannes. A fleet of no less than 80 yachts built between the end of the 19th century and the present day, will gather in the Cote d’Azur city’s Vieux Port before doing battle not just for the Panerai watches that will be presented to the winners of the various main categories but also the Trophy that goes to the overall winner of a season begun in April with the Antigua Classic Yacht Regatta.

Cannes is expecting tens of thousands of visitors to flock to the Régates Royales to see some of the most beautiful sailing yachts ever penned by the greatest architects in history, including Americans Olin Stephens and Nathanael G. Herreshoff, Fife di Fairlie of Scotland, Camper & Nicholson of England and Cesare Sangermani and Carlo Sciarrelli of Italy. Five races are scheduled for the Golfe de la Napoule. which overlooks the Iles des Lerins, between Tuesday, 23rd, to Saturday, 27th September. 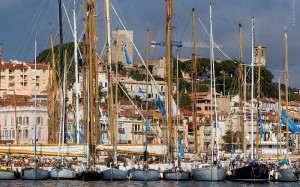 The yachts will be divided into “Vintage” (42 entrants), “Classic” (13 entrants) and “Spirit of Tradition” (12 entrants) categories but will also be joined by the Metre Classes – International 6-Metre, International 8-Metre and International 12-Metre Class yachts. The latter in particular have written some of the most glorious chapters in America’s Cup history and entrants at Cannes will include Vanity V (1936), Trivia (1937) and Vim (1939). Also in attendance once again this year will be a fleet of around 40 Dragons, a former Olympic class designed by Norwegian Johan Anker in 1929. At around 9 metres in length, the Dragon is one of the most popular racing one designs in the world with over 1,500 built to date.

The Big Boats bearing down on Cannes include the imposing 60-metre Elena of London, a Spirit of Tradition splashed in Spain in 2009 with a slew of classic regattas and several transatlantic crossings already to her credit. The 33-metre schooner Altair (1931) and gaff cutters Moonbeam IV (1914) and Moonbeam of Fife (1903) will also be lending the event a strong flavour of the design and construction talents of the William Fife yard where Officine Panerai’s own brand ambassador, the 1936 22-metre ketch Eilean, also splashed.

The Classic category promises more thrilling clashes between the fearsome Namib, manned by professional sailors of the likes of Mauro Pelaschier, Chin Blu III and Naif. Also in the same grouping is Moro di Venezia I (1976), winner of the 2013 Panerai Trophy, and a 1973 Sparkman & Stephens design, Ojalà. 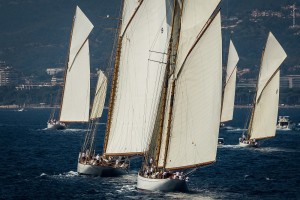 The 37-metre Shamrock V, on the other hand, is the only surviving wooden-hulled J-Class. Launched in 1930, she was commissioned by English tea magnate, Sir Thomas Lipton, as his fifth and final America’s Cup challenger but was beaten by the American defender Enterprise. Today, despite modifications that force her to compete in the Spirit of Tradition category, Shamrock V continues, like Endeavour and Velsheda, to represent of the most fascinating periods in the history of sailing.

As happens each year, there will also be a series of competitions and other side events on the dockside for the crews. These range from mast climbing to tug of war, a painting competition, music concerts, and breakfasts and cocktails every day before and after the racing in the Officine Panerai Lounge.