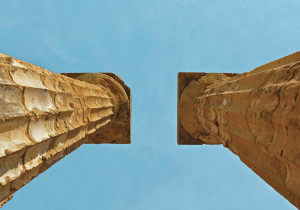 It was on the 10th of July when we left from Milan Airport to Palermo. At the Airport the welcome advertising campaign “Sicily, so much history” announced we were just arrived in a place of nature, art and traditions.

Invited by the Ferretti Group to experience a special [highlight color=”yellow”]Italian lifestyle holiday[/highlight] on board the flagship of the ITAMA fleet, we cruised along the Italian Southern Coast, from Palermo to the iconic island of Capri, trying to enjoy as much as possible all the local beauties and features, which make our Country one of the best destinations in the world. 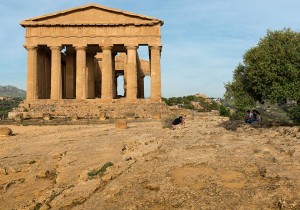 It’s not surprising that Palermo and its Arab-Norman architecture, together with the Cathedral Churches of Cefalú and Monreale, have recently become UNESCO heritage site this year, representing the history of Arab expansion in southern Europe, from the Iberian Peninsula to Sicily and Malta and left a legacy, a cultural heritage influenced by Arab, Greek and Norman elements, an exceptional cultural exchange, dating from the era of the Norman kingdom of Sicily (1130-1194). Muslim, Byzantine, Latin, Jewish, Lombard, and French traces can be found in the enlisted sites.

To celebrate this important acknowledgment, Ferretti Group with its brand ITAMA, one of the most appreciated name in the yachting world, representing at best the Italian lifestyle, organized this special event named ITAMA POWER CIRCLE, both for business reasons and as homage to the region of Sicily. 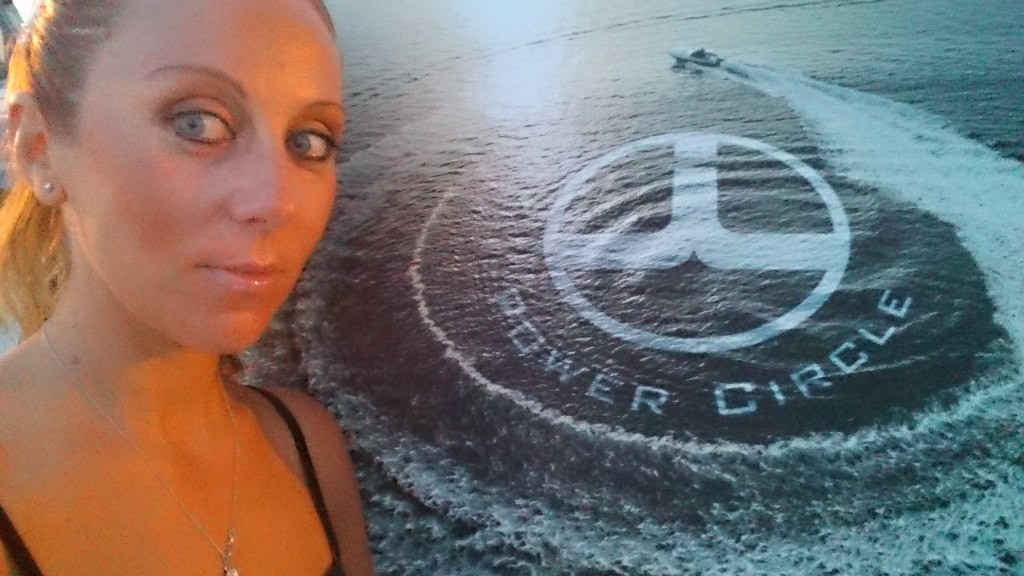 The sporty Itama 75 is a concentration of style and power, an unmistakeably distinguishable vessel created for true open yachting enthusiasts. The perfect blend of class, technology and extraordinary liveability; the flagship of the Itama fleet offers open-air yachting enthusiasts unprecedented space: from the elegant and generously-sized cockpit, to the inviting lounge area beyond the helm station, and the large sundeck on the bow. 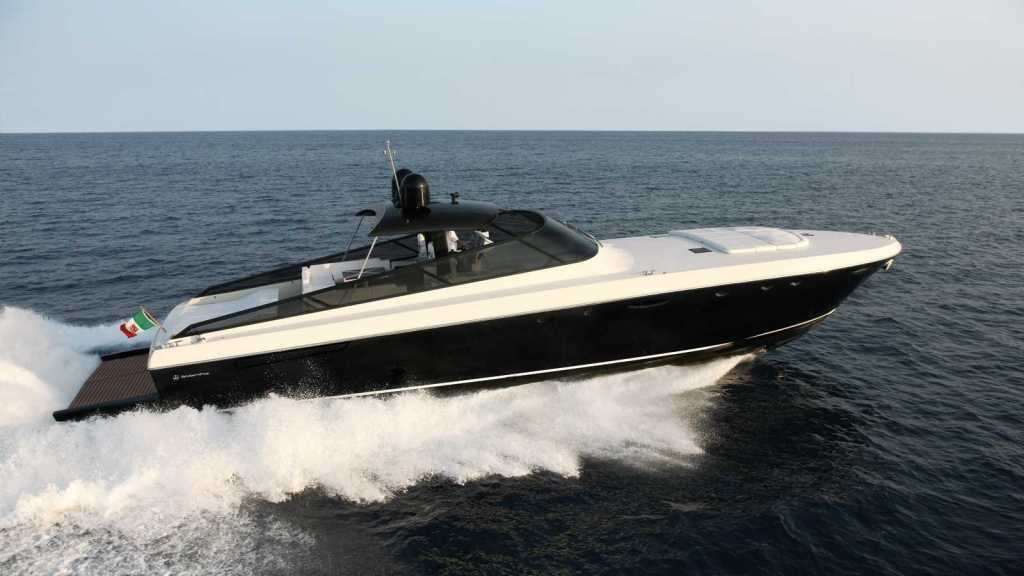 In terms of power, her twin 1823 hp MTU engines with surface-piercing propellers achieve speeds of up to 42 knots with sparkling performance, enhanced by the slender profile and use of carbon fibre, which makes the exclusive sliding avantop and the centre canopy so lightweight and elegant.

Refined and inviting interiors, maximum liveability and privacy on board. The interiors have been developed to offer all guest the widest liveability, thanks to a galley equipped with every amenity and a spacious dinette furnished with a comfortable L-shaped sofa and extending table, for relaxed lunches or dinners with friends. The chaise longue in the master cabin for relaxing while appreciating the sea view, capacious wardrobes, and elegant finishes, all enveloped in a warm atmosphere set off by precious woods and luxurious details, turn this yacht into a luxury home on the water. The layout of the interior, with welcoming and refined guest cabins, is ideally suited for unforgettable cruises spent with family and friends.

To fully understand her exterior design, you should try the strong emotion to enter the marina standing on the bow. “Power” is the name of the feeling you get, a vibrant sensation of total control of the sea and the land you are approaching. There are no other boat with a so long and large bow, designed with minimal elements to allow the direct contact with the sea and the landscape, that’s the ITAMA sporty attitude! 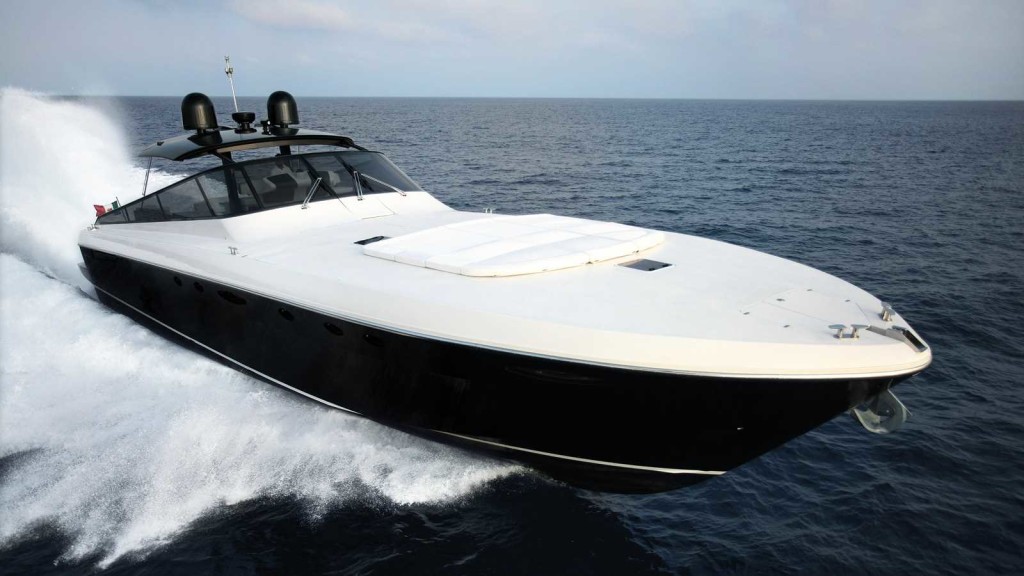 Despite her 2008 design, it is still a unique boat with unmistakable features. A luxury open yacht with wide external areas to live the day and the night in full relax. If during the day it is the bow the most attractive part, it is at night that her sporty soul turns into elegance, enlightening all aft areas and turning them into a romantic, pleasant and convivial place.

PALERMO, SO MUCH HISTORY! 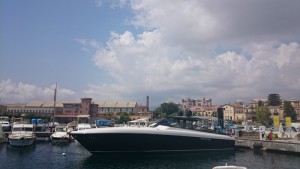 After our landing in Palermo at Falcone Borsellino Airport, we reached the Marina Villa Igiea, a silent marina for small boats and megayachts, only 3 km far from the city centre, overlooking the sumptuous Grand Hotel Villa Igiea. The villa restored by renowned Art Nouveau architect Ernesto Basile at the end of the 19th century, is pleasantly surrounded by loveable luxuriant gardens and boasts a little private marina. 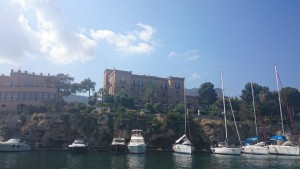 The Grand Hotel represents the perfect landing place for those exclusive clients coming from the sea on board their luxury boats, in search of luxurious stay enriched by Gourmet experiences and breathtaking sea views. (www.villa-igiea.com)

After two days of sea trials in cooperation with the local dealer of Ferretti Group, we explored the close coasts near Palermo, spending some pleasant time in Mondello, one of the favourite tourist destinations in Sicily. Characterized by a sandy bay of tropical colors, with a coastline of more than 1.5 kilometers long, Mondello is famous for its beach, which is one of the most coveted shores of Italy, for its many Art Nouveau villas and for sites of historical interest. 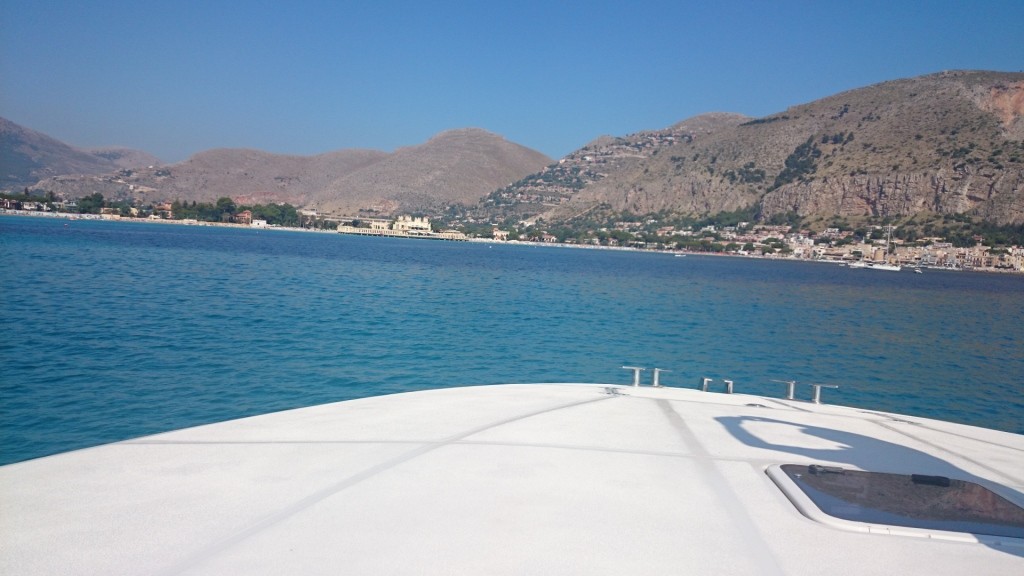 Mondello has many accommodations, numerous yacht clubs and exclusive clubs, restaurants, shops, a marina and an old bathhouse, the Antico Stabilimento Balneare, one of the landmarks of the city. (www.mondellomare.it)

Haute cuisine between sky and sea. We did not miss the opportunity to enjoy a real special dinner at restaurant “Alle Terrazze”, one of the most exclusive restaurants in Palermo, with its spectacular waterfront panoramic view. After a careful renovation, the restaurant has reopened to the public in spring 2011, taking up the glories of the past without omitting the comforts of the present. Total white décor, with the fine touch of the comfortable Masters chairs designed by Philippe Starck for Kartell, pleasant decorations and works of art by contemporary authors give the environment a cozy and refined atmosphere.

After having enjoyed the wonders of the Sicilian blue waters, we dedicated two days to the discovery of the Arab-Norman Palermo. The Palatine Chapel is the royal chapel of the Norman kings of Sicily situated on the ground floor at the center of the Royal Palace in Palermo. The chapel combines harmoniously a variety of styles: the Norman architecture and door decor, the Arabic arches and scripts adorning the roof, the Byzantine dome and mosaics. The mosaics of the Palatine Chapel are of unparalleled elegance as concerns elongated proportions and streaming draperies of figures.

The Palace of the Normans (or Royal Palace of Palermo) was the seat of the Kings of Sicily during the Norman domination and served afterwards as the main seat of power for the subsequent rulers of Sicily. The building is the oldest royal residence in Europe, the home of the rulers of the Kingdom of Sicily and imperial seat with Frederick II and Conrad IV. 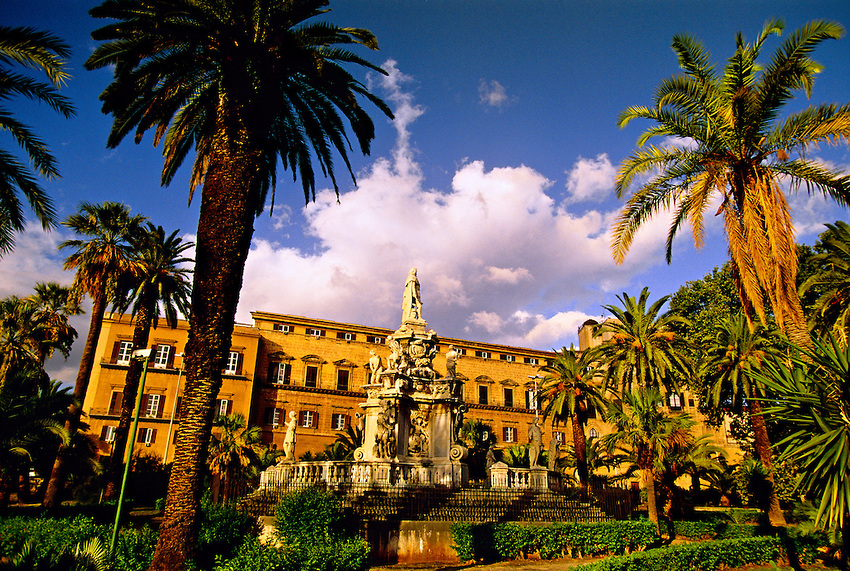 The Cathedral of Monreale (only 15km far from Palermo) is one of the greatest extant examples of Norman architecture in the world. It was begun in 1174 by William II, and in 1182 the church, dedicated to theAssumption of the Virgin Mary, was, by a bull of Pope Lucius III, elevated to the rank of a metropolitan cathedral. The church is a national monument of Italy and one of the most important attractions of Sicily. It is, however, the large extent (6,500 m2) of the [highlight color=”yellow”]impressive glass mosaics[/highlight] covering the interior which make this church so splendid. With the exception of a high dado, made of marble slabs with bands of mosaic between them, the whole interior surface of the walls, including soffits and jambs of all the arches, is covered with minute mosaic-pictures in bright colors on a gold ground.

From the Arab-Norman Palermo to the exhibitions of two controversial contemporary artists: the art of Fernando Botero, considered one of the most representative artist of the contemporary art, is present with the exhibition “Via Crucis. La Pasion de Cristo.”, at Palazzo Reale / Royal Palace until September 30th 2015.

Hermann Nitsch is the Austrian artist who literally shocked his public with his art, paintings and performances, and for this reason often boycotted. Until the day before the opening of his exhibition “Orgien Mysterien Theater”, the public opinion rose up against the artist, trying to impede the event.

Nitsch, associated with the Vienna Actionists, addresses the excessive beauty and intensification of human existence, with abstract paintings and performances considered both ritualistic and existential. The scene is often involved with slaughters, religious sacrifices, crucifixion, as well as blood and flesh. ZAC, Cantieri Culturali alla Zisa, until September 20th 2015. 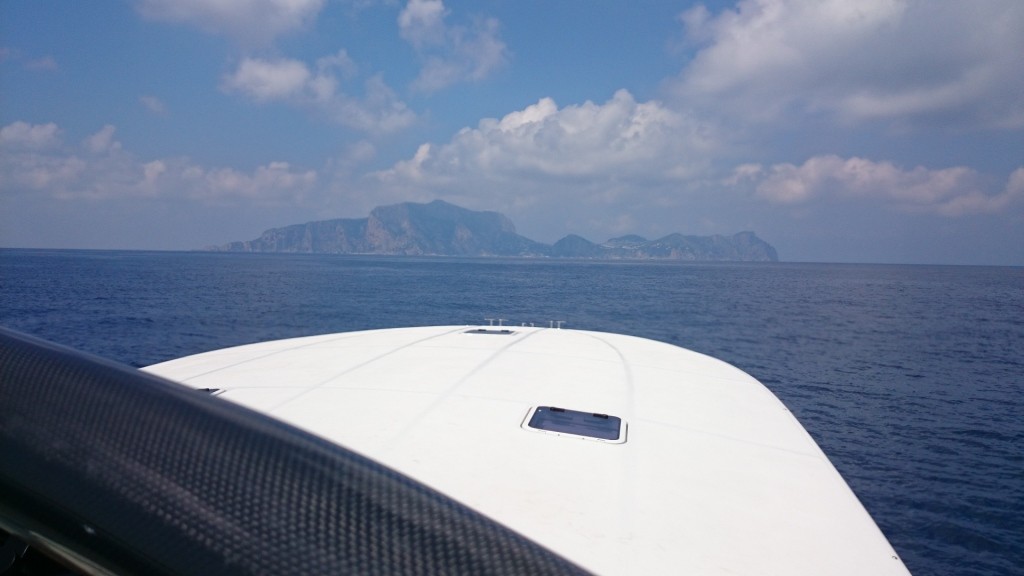 After having left the heavenly Aeolian Islands on our right, we reached the superlative island of Capri, cruising at the speed of 33.8 knots (max speed 42 kn, cruising speed 38 kn). Glamour destination and land of dreams for many sea lovers, located in the Tyrrhenian Sea off the Sorrentine Peninsula, on the south side of the Gulf of Naples, Capri has been a resort since the time of the Roman Republic. 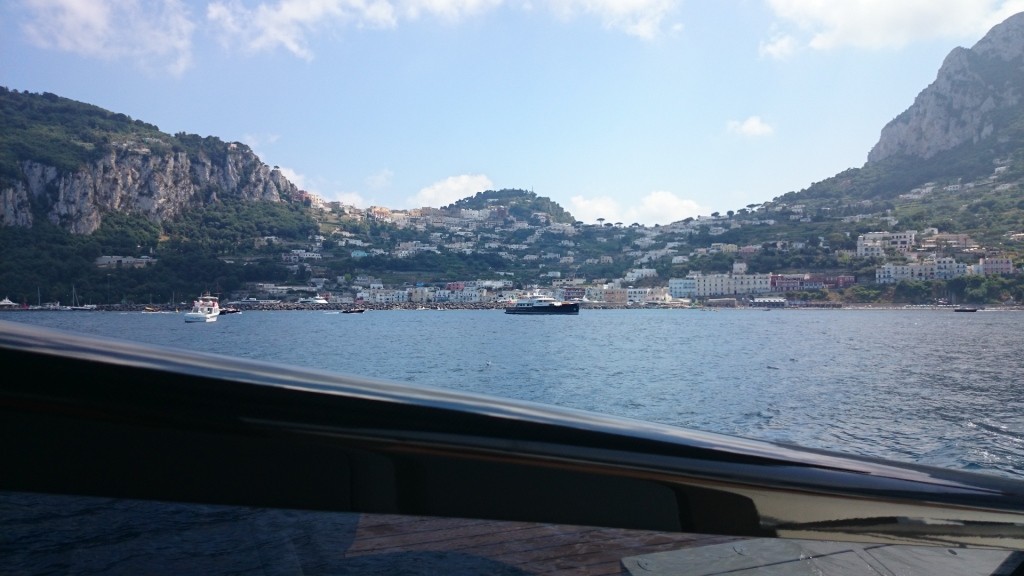 At our arrival at the Marina Piccola, Capri immediately showed its distinctive landscape and unveiled as luxury yachting destination. Some of the main features of the island include the following: the Belvedere of Tragara (a high panoramic promenade lined with villas), the limestone crags called sea stacks that project above the sea (the Faraglioni), the town of Anacapri, the Blue Grotto (Grotta Azzurra), and the ruins of the Imperial Roman villas. 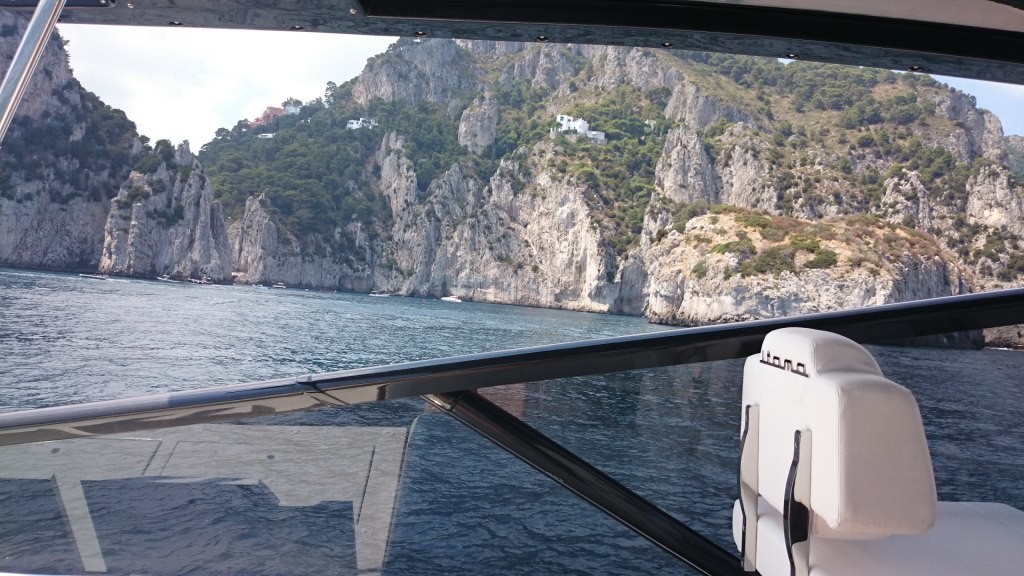 Reaching the island from the sea is a real unique experience, the exciting view of the colours of the Marina Piccola, the peaks of its mountains and the greatness of the Faraglioni, make Capri almost a mystical place. 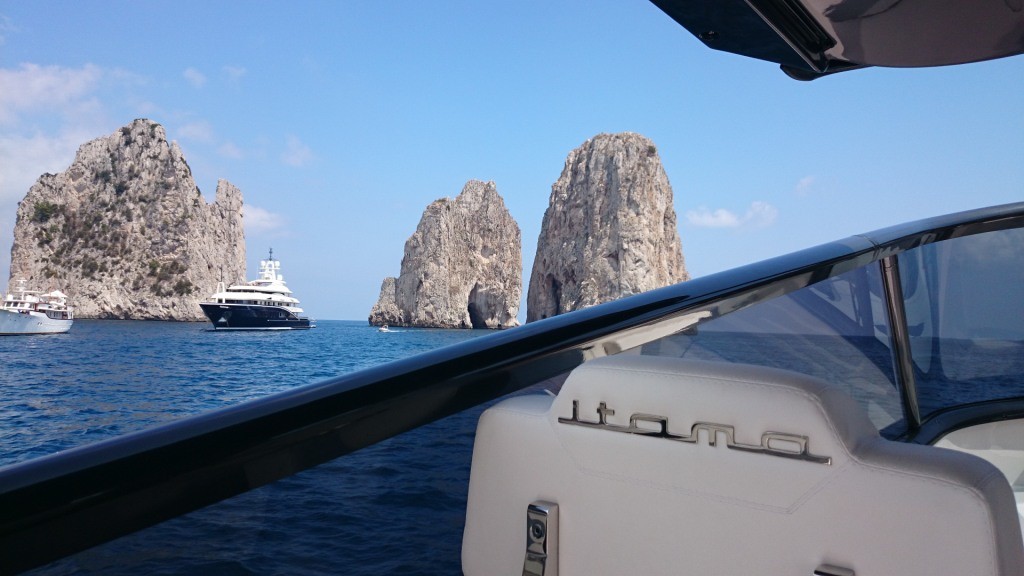 In Capri the second part of the Itama Power Circle event by Ferretti Group took place on 18/19th July.  Born in 2006, this ITAMA event is the exclusive occasion for those who want to discover the timeless charm of the ITAMA fleet. From Mondolfo to Capri on board Itama 75, 62 and 45, to celebrate this icon-brand, representing the Italian yachting lifestyle in the world.

Discover ITAMA 75, ITAMA 62 and ITAMA 45. Itama, brand of the Ferretti Group, will be present at the next Cannes Yachtig Festival from 8 to 13th September 2015.