[dropcap]A[/dropcap]re polar expeditions the new trend? For owners who want to venture well beyond the usual yachting circuit to incredible destinations that others can’t reach, Damen has created its expedition yacht range (from 65 to 100 metre) to experience yachting in total luxury, comfort and style. Following the sale of the first DAMEN SeaXplorer yacht last month, DAMEN will be at the 2016 Monaco Yacht Show welcoming guests and visitors at The SeaXplorer Lounge, located on board the DAMEN Yacht Support vessel FAST & FURIOUS, where legendary ocean explorer Dr Don Walsh will share his experiences from the record-breaking 10-kilometre descent to the world’s deepest ocean trench (which he later helped James Cameron to repeat) and his more than 50 polar expeditions.

The first model in the newly updated Damen YS5009 range has just been launched under the name Fast & Furious. This 55 metre superyacht support vessel from the Damen Shipyard in Vlissingen will make its debut in Monaco next week. Since DAMEN and AMELS launched the Yacht Support range in 2009, 9 vessels have been delivered or are in build. For owners looking to boost their yacht’s capability, partnering with a Yacht Support vessel has become the beautiful solution – fast delivery in as little as a few months, great benefits and value for money that no other solution can match.

Following GARÇON, ‘6711’ and the recent delivery of the updated 69.15-metre YS 6911 (227 ft) INTREPID, DAMEN is now building its fourth vessel around the 70-metre mark in the Yacht Support range. The new YS 6911 features the much-requested all-weather helicopter hangar and will be delivered in spring 2017.

50-metre AD-VANTAGE in the Pacific

Rob McCallum, co-founder at luxury expedition specialists EYOS Expeditions, wll be also available to explain why an increasing number of high-end yachting clients want to go to the wildest places on Earth and how to get there in total comfort, luxury and safety. 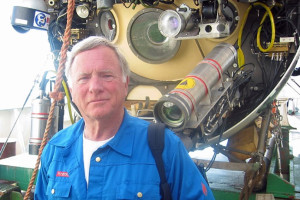 Don Walsh began his career as a US Navy submarine commander. In January 1960, he and Jacques Piccard took the submersible TRIESTE to the deepest point in the world’s oceans, the Challenger Deep in the Mariana Trench: a record breaking 35,840 feet – more than 10 kilometres deep. For 52 years no one had repeated this exploration. Then in March 2012, James Cameron piloted his DEEPSEA CHALLENGER to this same place. Walsh was also a member of that expedition. For the past four decades, Don Walsh has worked on a huge number of dive expeditions, including the wrecks of the TITANIC and BISMARCK. Walsh’s voyages have taken him to both the Arctic and Antarctic regions, including more than 50 polar expeditions including the Northwest and Northeast Passages, the North (5 trips) and South Poles. The “Walsh Spur” (ridge) near Cape Hallett is named for him in recognition of his contributions to the US Antarctic Program. With his vast knowledge of oceanography, he is a sought after author, speaker and marine policy advisor. He has held a wide variety of academic positions in ocean sciences.

The first Damen SeaXplorer was sold this summer, after its introduction less than 10-month ago at the Monaco Yacht Show. The SeaXplorer 65, a crossover between professional technology and superyacht exclusivity, is scheduled for delivery in 2019. The expedition yacht offers 40 days of autonomy without port call and complies with the stringent new environmental and safety standards in the IMO Polar Code’s B category. 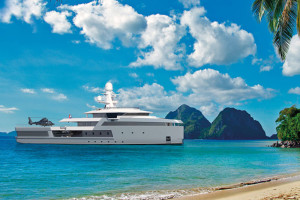